Biak na bato is known for both of its natural and historical value. It was declared national park by President Manuel L. Quezon in 1937. History has it that Filipino revolutionaries like Emilio Aguinaldo used the numerous caves of Biak na Bato as refuge when they fought against the Spaniards.

The caves of Biak na Bato are no ordinary caves.  The caves are beautifully lined with gigantic stalactites and awesome rock formations.  Some are even teeming with wildlife. 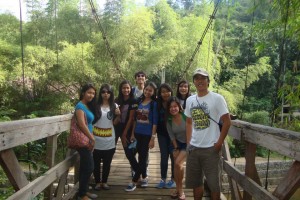 Along with my co-Trippy Traveller Jessica (in blue, left), we explored the park with some BS Tourism Management students of Bulacan State University who needed to do some research studies and gather some educational information about the park as it is becoming popular not only to local tourists but to foreign as well.

It was a sunny day and the skies were clear, we went off from Malolos, Bulacan at around 8 in the morning and got there at around 10, our driver wasn’t really the type of a speed-racer and was driving at probably around 50-60 kph only, another thing is that we didn’t pass by the highway so it took us around 2 hours getting to the site. But if you are taking the NLEX, it would be a shorter trip, take take Sta Rita exit, head to San Miguel, Bulacan, a few more minutes and you’re there.

Biak-na-Bato is home to hundreds of little and big caves, the Spaniards had difficulties in fighting the Katipuneros because of these caves.

Upon entering, you will be asked to register; registration would cost students PHP20 per head but for non-students, PHP30 is usually collected, regardless of the season. Back when I was in high school, the entrance fee was only PHP10 per head, more than a decade passed and it increased just a bit.

Local tour guides will be accompanying you inside, the place is huge, and could be dangerous without local guides knowledgeable enough about the place. Our guide charged us for only PHP200 for a 2-hour tour, cheap enough since we were 9 in the group.

The guide offered us a 6 hour tour, a package of seeing 4 caves and we will be charged  for only PHP500 but we decided to see only one of the caves, knowing single cave alone would consume much of our time already.  So we went to see Bahay-Paniki Cave, the biggest among them all, named for the bats residing in the caves. We were told beforehand that it would be a smelly tour due to bat droppings and urine. 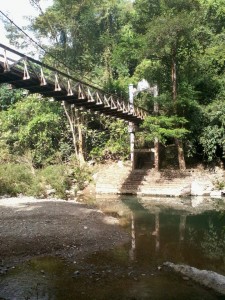 This hanging bridge was built in 1998, in conjunction with the Philippine Centennial Celebration.  Being a soldier himself, Former President Fidel Valdez Ramos made it certain that this bridge was built before his term ends.

The bridge, though not too old is a bit shaky now. We were like feeling some earthquake as we pass the bridge.

Below the bridge is where adventurers normally go for a swim. Of course, I wouldn’t waste the chance. I went down for a little swim for the experience. And by the way, this part of the park is the mostly where youngster enjoy picnic and swimming.

This is the most exciting part of the tour, the way to the cave, on the way there was a really rocky and slippery trail. Good thing we were all bringing rubber sandals. 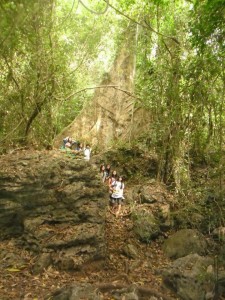 Still remember the story Jack & the Beanstalk? I guess we’ve found it here.

Can you imagine how huge this tree is? We’ve looked as if we were just little kids just by having it behind us.

Back in the old days, this tree served as watch tower to the Katipuneros. They were able to see all incoming visitors from the top. I wonder what happened next after seeing the Spaniards coming though, I mean, how they managed to go back down.

Locals call it Bonsai, opposite to its actual appearance.

This is where the adventure begins, like I said, it was a rocky and a bit slippery walk on our way to the cave. Few were already tired, exhausted from walking almost an hour, while some were just as excited as I was as the scenery gets unfolded and as we get nearer and nearer to the cave. Like any other adventure, the way in wasn’t really very easy but it’s all worth it. 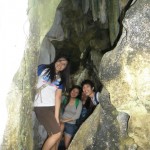 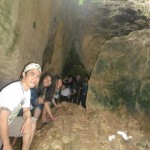 the way in wasn’t really easy but was fun though 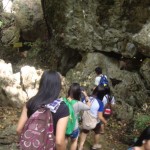 Tired but not giving up 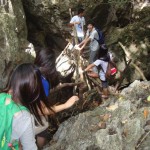 Fun of getting there 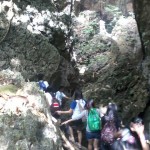 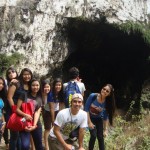 This is why it’s called biak na bato, the whole thing collapsed into two

So what’s on the inside? What to do after getting to the cave?

Inside the cave, you can do picnic, you can take your packed lunched there and later on go swimming, but there are some parts where you won’t allowed you to go to, for safety reasons. Since it is a cave, some parts of the water are just too deep and there are also areas too  stony that you could get your feet stuck which could possibly result to drowning and in these parts, listening to the local guide is very important, just do as they say. 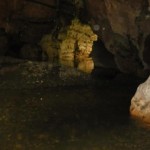 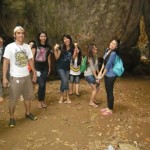 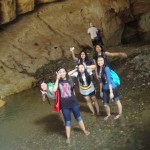 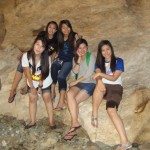 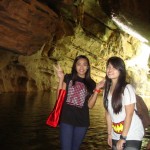 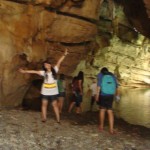 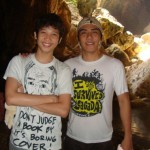 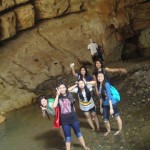 To sum it all up, it was a fun tour and I recommend it to groups of people who are on a budget and are interested in hiking, camping, spelunking or caving, swimming. You can stay the night if you want, the administrators will give you at least two baranggay tanods to guide and accompany you the whole night.

By public transportation, you may board a bus from  SM North in Quezon City en route to San Miguel, Bulacan and ask the driver to let you off at the park entrance. You may also rent a private van or FX from here and be prepared to pay up to P2000.

Oh thank you so much sir Marvin for your compliment. Take care and see you soon! Stay blessed!

I am so happy for you sir Ace, and you are so good in making such a wonderful article. God Bless you more!